It has long been a truism that Corona has strengthened the trend toward home offices. Will office workers only work at their kitchen tables at home in the future? Not at all, say experts: They need the social exchange in the office at least occasionally. On the other hand, the homeworking of many employees over longer periods of time makes it possible to efficiently reduce the size of offices, which lowers costs for companies. So from now on, there will be both an office at the employer’s and a home office: a hybrid working world is emerging.

How do companies view the home office in early 2021?

After a year of corona crisis, the Munich-based Ifo Institute surveyed nearly 800 HR managers on their opinion of the home office and hybrid working. 73% of them believe that a megatrend has begun in which they want to participate. According to Corona, they also want their employees to work partly in the company and partly at home. Contributing to this attitude is the fact that most employees have adapted relatively quickly and well to the home office. Technology allows this anyway, as companies manage most of their data in a collaborative cloud, where several employees can work on a database themselves at the same time. Therefore, productivity did not drop as a result of the home office. Teams and their managers were accessible at all times, but the latter had to establish new management mechanisms. How, when, how long and in which outfit a video conference is held, whether employees must be reachable at all times via desktop chat and how to deal with e-mail, messenger and telephone, all this had to be re-established first. But it works. The question now is whether this means that the home office has become the “new normal. Experts dare to doubt this. Apart from the fact that the majority of value creation cannot be shifted to the home office, office workers also complain about some of the disadvantages of working at home. We humans are highly social and are most creative in direct interaction. Digital communication can only replace this to a limited extent. In addition to the isolation at the kitchen table, the lack of separation between work and leisure time is also a major problem for many employees in the home office. Parents who have to homeschool their children in addition to working from home suffer the most. Last but not least, employees are burdened by the lack of direct feedback: an encouraging smile in the office is still better motivation than a smiley face on the screen. This will probably never change. People want to feel they belong to a team, they want to discuss things and occasionally have a coffee together. Ergo, no one seriously aspires to permanent, exclusive home offices. Instead, the future is likely to be hybrid. One part of office work takes place in the home office, the other among people in the company office.

Corona, however, has heralded a cultural change that is now considered irreversible. In Germany, the presence culture was very prevalent until 2019, but this now seems to be history. “New Work” was, after all, already on the rise before Corona, it referred to the hybrid way of working partly in the company office and partly in the home office. In the meantime, there are quotas for the home office, such as for three days per week. Office space projects, on the other hand, are only being tackled hesitantly. As a result, we are currently experiencing a hybridization of our working world. Home office and office presence are being balanced within the company. Individual companies are likely to adjust the ratio even more frequently in order to find the right mix for their workforce. Hybrid work situations have two interesting implications:

The housing market is regionalizing again. Pressure is disappearing in overheated urban centers.
The office of the future is being redesigned. Work cubicles in open-plan offices are probably a thing of the past.

If employees only have to travel to the office twice a week, they will once again accept longer commutes. As a result, they again prefer to live in rural areas with all their charms. Higher costs per trip are amortized by the more favorable real estate prices or rents. Since the end of 2020, the demand radius around the conurbations of Munich, Hamburg, Berlin, Frankfurt and Stuttgart has already successively increased.

Hybrid working is changing the demands on living. Commuting is becoming less frequent, but longer, and more affordable, but also different. Anyone who regularly uses their home office on up to three days a week needs a large study. Real estate experts have already calculated this: The additional space required amounts to an average of 10 m² per household. Size alone is not enough: it must also be possible to separate the study. Last but not least, it must be correctly declared in the tax return, which is uncharted territory for many employees. The classic office in the company, on the other hand, is taking on new functions. It is changing from being primarily an office workplace to a communications center. Workplaces are shared so that they can be left without personal belongings at the end of the working day. With this flexibility, companies are saving enormous capacities – in favorable cases, almost half of their office costs. Commercial architecture is moving away from small cells, creating more meeting rooms with larger spaces in offices. Increased hygiene needs must also be taken into account.

Will the corporate office disappear altogether at some point?

The answer in 2021 is: No, it will stay with us. We need physical meetings to cultivate innovativeness and team spirit. The future is hybrid, not purely digital. 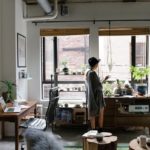 The future of work is hybrid 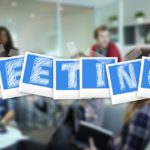 Reflection of the meeting culture on the quality of the leader