For many companies and especially their employees, the cloud is usually still a mystery. Nevertheless, it can be said: the use of the cloud in practice has a good star. IT experts even favor the cloud as one of the TOP 5 IT trends with probably extremely strong growth for cloud providers. But what makes the use of the cloud so desirable in practice? Are there only positive effects or can disadvantages also be found? And how is the cloud currently being used by companies?

In the area of using the cloud, it is primarily about the desire and the possibility resulting from the cloud in the area of information technology (IT) to be able to work efficiently and at the same time flexibly and agile. While these parameters only appeared feasible for startups for a long time, larger companies are increasingly making use of these advantages with the help of cloud technologies.

A study by Bitkom ( Cloud Monitor 2019 ) in the time interval from 2016 – 2018 that more than 70 percent of the companies surveyed (as of 2018) have not only integrated cloud technologies into daily business, but also actively use them (see Figure 2). These results not only speak for a rapid increase in the use of the cloud in practice. It also shows that companies are ready to ignore the risks of use in order to actively take advantage of the many opportunities offered by the cloud.

In addition to the type of use, the study also looked at the advantages and disadvantages of the cloud.

But even if almost three quarters of all companies surveyed agree on using the cloud, the areas of application still differ. Because cloud technologies have long since ceased to function purely as digitization tools for internal processes and procedures. Rather, it can be used to further develop current business models or even to create completely new ones. This is achieved, for example, through new sales channels such as online shops.

In addition, the cloud is also used to develop trending topics such as Industry 4.0. For example, big data scenarios are tested in advance using cloud technologies.

Benefit in all areas from the possibility of storing critical data in the cloud (see Fig. 3). With the help of these, intelligent forecasts can be evaluated.

Since more and more companies have recognized this opportunity, the upload volume of sensitive or secret data to the cloud has risen rapidly (see Fig. 3), opening up more and more new possibilities for companies to use the cloud in practice.

But the use of cloud technologies also has many positive effects. Four opportunities came to the fore in the results of the study (see Fig. 4).

For example, 80% of the companies surveyed stated that the internal IT can be changed significantly faster or realigned without additional costs thanks to the cloud-based, flexible and rentable systems. In addition, completely new technologies can be tested cost-effectively.

But geographically distributed work can also be simplified in practice by using the cloud. Three quarters of the companies participating in the study stated, for example, that thanks to the browser-based software, significantly better access to data from distributed locations is possible. Ultimately, this enables not only better efficiency in daily business but also cost savings.

In addition, companies also see great opportunities for customers in the cloud. More than 60% of the companies stated that their own IT performance had increased significantly, which ultimately also resulted in higher customer satisfaction. Finally, more than every second company (60%) stated increased flexibility. Changes in the company can generally be implemented much faster thanks to the new options such as flexible change from workplace IT and IT. In addition, they appreciate the advantage that internal hardware and software can be tailored much better to the workforce and individualized for them.

But with the use of cloud technologies, in addition to the many opportunities, there are also some risks. The companies surveyed in the study fear in particular difficulties with data protection, rising IT costs and failures (see Fig. 5).

Failures can have serious effects, for example if work comes to a standstill. More than 40% complained that there had been significant failures in the area of information technology in the last 12 months.

It therefore makes sense for companies not to become dependent on the use of the cloud in practice and to draw up emergency plans at an early stage.

But also in the area of data protection, companies should take early action in order to avoid loss of trust among customers and high fines. Over a third of the companies saw themselves exposed to at least one such incident in the last financial year without emergency plans such as audits and IT security concepts for the secure storage of data.

Furthermore, more than a third of the companies surveyed also complain about IT costs that are well above the planned budget. Which is why measures should also be taken here that precisely analyze the cost-benefit ratio of the acquisition of cloud technologies.

Conclusion – the cloud in practice

The use of the cloud in practice is primarily based on the digitization of internal processes, new sales channels and the development of trends such as Industry 4.0. According to current studies, more than 70 percent of all companies use cloud technologies, which means that the IT resource has long since developed from a start-up trophy to an all-round winner.

Even if 30 percent of companies still fear risks such as data protection, costs and failures – almost three quarters have already recognized where the great opportunities of the cloud lie: fast scaling and good IT performance, geographical cooperation and, above all, significantly more flexibility! 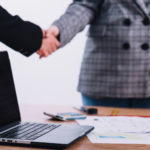