tip : You are welcome to read additionally what the Differences between medium-sized companies and corporations are.

The last time I was really active as an agile consultant in corporations in 2015, the first teams were organized according to agile methods. The position of the team leader in particular was criticized and its importance in an agile world was questioned. I found the following scenario (see illustration).

The teams were based on agile methods, had a Scrum Master (usually someone in the team did it on the side) and a Product Owner, who was either on the team, the team leader or someone from the specialist department. These were often the first steps and my task was to bring agile processes closer to the teams.
Reading tip: Scaling Scrum
Now I was back on site and was guided through the new, modern corporate premises. It was impressive what was built there. There are 8 tables each (1 Scrum Team) with one board. Then there was a small partition or piece of furniture for the next agile team.
I was very surprised and excited when I saw the organizational chart. Because the three corporations have made insane progress and have almost broken out of their structures. For me, there was a flatter hierarchy with 30 to 50 agile teams, which are jointly led by 1-3 department heads as well as 5-10 Scrum Masters and 5-10 Product Owners. In addition, there were many other roles such as the Feelgood Manager or similar staff positions.
The following figure shows the scenario using a fictitious group. There are 18 teams as well as 3 Scrum Masters and Product Owners who lead the department. You already notice that a Scrum Master and Product Owner have to look after 6 teams. There are also two department heads who jointly manage disciplines and exchange ideas.

I have to say that I was really excited about what has happened over the years and I think this is the right way to go. The transformation has not stopped for a long time, but it is making great strides. I found it exciting that the team leader role has dissolved and the department heads are already beginning to lead together. I think it took a lot of work to do this. I would therefore like to express my great appreciation for the three corporations. If you want to see another approach, you can take a look at my 2nd roundtable.
Reading tip: 2. Round table for scaling Scrum

Corporations are currently in a state of great upheaval. Agility is much more difficult to implement and research, especially due to the large number of people. In the conversation we focused on two main areas. On the one hand, this is the real performance of the new organization and the fact that this form of organization is heavily dependent on the Scrum Masters and the corporations are unable to find enough suitable Scrum Masters. I will now explain both challenges in more detail.
Agile Taylorism Risk
Agility is behavior, mindset and culture. It is common knowledge. For this reason, coaching and teaching the agile mindset are important. This is currently a point that managers want to increasingly implement. Without a corresponding culture and framework, you steer into agile Taylorism. What do I mean by that?
Central points of Taylor (1911) were that the main focus of a business organization should be directed to achieve the highest possible economic utilization of the workers and the machines. In concrete terms, this means that workers and machines should achieve their highest productivity, their highest efficiency. Another goal is the division of work into the smallest units. In this way, every employee can concentrate on a small part of the work and do it better and faster. Today we know that precisely this work leads to demotivation and monotony in the execution of tasks. The criticism of Taylor can be found in the “humanization of work”. Agile work / agile methods are seen as an alternative.
So let’s imagine that 40 agile teams each have a Scrum Master who wants to get the most out of the team. The individual components of the software are also strictly divided between the teams (one team makes payment, the next makes contact forms, etc.). If we compare this with the previous paragraph, we notice that we have agile teams, but at the same time we also implement Taylor’s ideas very precisely. For this reason, the managers of the corporations are increasingly focusing on this, since the achievement of Taylorism is not the goal.

You can see that in the fictitious example, three Scrum Masters have to accompany a large number of teams. This is a tough job. In none of the three companies were there enough positions on the one hand and enough applicants for the position of Scrum Master on the other. However, precisely the position of the Scrum Master is decisive for the success and the communication of the agile mindset. I therefore like to refer to the Scrum Master as the “extended arm of agility”. So we have talked about this point in more detail. The current challenge, according to the manager, is that Scrum Masters can hardly be found, although many positions are open. Nice Boris Gloger stated in 2012 : “Of the 600 that I train alone each year, shouldn’t 10% really want to do Scrum each year? But that is not the case, as I often notice. There is demand, but hardly any people who want to work as Scrum Masters. What’s going on there?”
But why doesn’t anyone want to become a Scrum Master? We asked some employees and Scrum Masters, who only held the position for a while. In summary it was said:

Overall, the job was described as very ungrateful. It is certainly tough, because in the example alone, a Scrum Master (8-man Scrum Team) has to lead 24-32 developers. As important as the position of Scrum Master is, it is also difficult to fill it. In this regard, I was already wondering why many recruiters are currently looking for Scrum Masters for corporations and why freelancers are a dime a dozen as Scrum Masters.

I then brainstormed with all three corporate managers on how we could tackle the current challenges. You presented me with current ideas and I showed my research results.

Against agile Taylorism Cross-functional with OKRS

First, we discussed how the notion of agile Taylorism can be prevented. In addition, there was initially the idea that teams should not be set up according to components (unless there is no other way). Thus, cross-functional teams are to be formed. As a result, a wide variety of experts such as testing, requirements engineering, backend and frontend developers, etc. are mixed in the teams. This is also known under the term feature teams.
In order to maintain controllability, motivation and control, we found the concept of OKRS (Objective Key Results) very exciting. OKRS means that you measure performance against team goals. I explained this in more detail in another article. In the first attempt, three teams should be controlled via OKRS. I’m excited to see the results and I’m currently trying it out with my team as well.
Reading tip: OKRS – the agile management method

Solution to the Scrum Master dilemma

Example from the middle class

I am also currently scaling the Scrum method to several teams in my job. I am currently working for a medium-sized company and of course I don’t have 50 teams, but 5 teams. All of them work for different customers who each provide the product owner, which is why we do not have our own product owner. However, every team has a Scrum Master. This ensures that the customer’s requirements can be met and that the team can work according to Scrum without any disruption.
Our approach is to include the Scrum Masters on an extended management board. This board can jointly make decisions by consensus. Thus we give the Scrum Masters a forum to enforce decisions. We hope that this will give the Scrum Masters position the necessary impact.

Of course, these were only the results of half a day’s discussions and I certainly haven’t covered all the details. There are further experiments by the corporations such as the appointment of Chief Scrum Masters etc. However, there was not enough time for this or the managers are trying it out and rather wanted to exchange views on points that are currently important to them.
Nevertheless, I believe that we were able to get to the heart of the matter and find two exciting challenges and possible solutions. If you also work in a corporation, write to me via email or in the comments whether it is similar for you. I have to express my respect to the corporations because they are really far advanced and the journey to agility has already taken shape. I too recently finished a change. You can find this story in another article.
Reading tip: My story as a change agent
[yop_poll id=”45″] 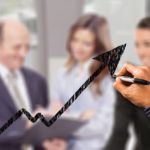 Advantages and opportunities of virtual teams 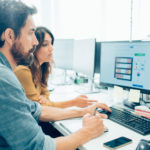